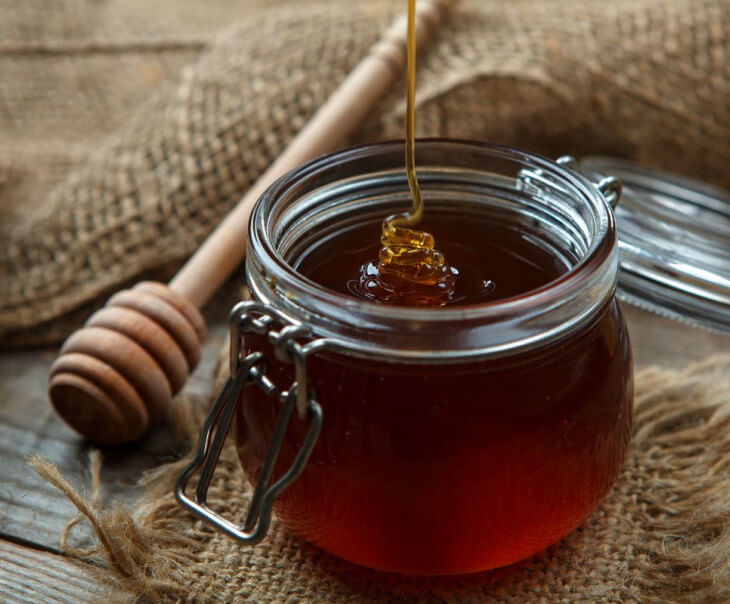 Honey extracted from the flowers of angelica, or angelica, is considered one of the rarest and most useful varieties of bee products. The fact is that, despite the high honey content and unpretentiousness, this plant is practically not grown in Russia. Basically, angelica grows in the northern regions – in the Urals, parts of Siberia, the Caucasus. Angelica officinalis blooms in July; then the bees collect the nectar for angelica honey.

This variety of bee product has a rich aroma and taste with hints of caramel and a slight bitterness. It is also specific in appearance and varies from rich amber to reddish, sometimes with green. Angelica honey is never liquid; usually it is viscous, stringy, and after crystallization it becomes like tar or hardened lard with grains of sugar in consistency. Angelica honey is not candied for a long time: unlike other varieties, even after wintering, it often looks as if it was recently harvested.

As for the beneficial properties of angelica honey, it has absorbed the healing properties of the plant itself, sung in myths and legends and endowed with a downright miraculous effect. No wonder the Latin name for angelica is Archangelica (Archangel). Angelica officinalis, like honey from it, is a real storehouse of useful acids, essential oils and trace elements, which explain the antiseptic and anti-fungal effect. Therefore, it is useful to give angelica honey for diseases of the oral cavity, such as tonsillitis, laryngitis and stomatitis, as well as internal inflammatory processes (colitis, gastritis) – it gently cleanses, restores and normalizes the microflora.

Angelica honey is useful for problems with blood pressure and blood vessels; it restores the function of the kidneys and liver and has a mild diuretic effect. The benefits of angelica honey for women’s health were also noted, in particular for problems with the cycle and poor lactation. Such honey is also effective when applied externally, both for cosmetic purposes (masks, scrubs), and for the rapid healing of wounds, pustules and boils on the body.

We recommend to try honey Diaghilevy “Berestov AS”, “Limited collection”.