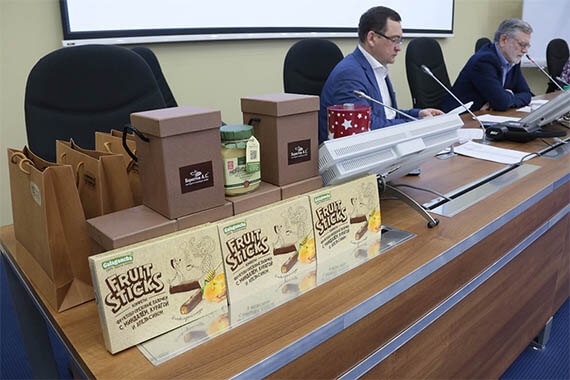 The company “Biological” has established prizes in the form of jars of selected honey “Berestov A.S.” “Favorites” and healthy sweets “Galagancha” for the participants of the “Total dictation” action at the Technical University of the Ural Mining and Metallurgical Company in the city of Verkhnyaya Pyshma, Sverdlovsk Region. This site has become the largest in the region. Two hundred people wrote dictation here at the same time.

The youngest participant in the action in this private engineering university was 8, the most mature was 80 years old. The drawing of prizes from the “Biological” company took place immediately after the writing of the dictation.

The author of the dictation this year was the writer and literary critic Pavel Basinsky. He chose Gogol’s poem “Dead Souls” as the main material for his composition. To read the text of 267 words UMMC Technical University invited the chief conductor of the Sverdlovsk Academic Theater of Musical Comedy, Honored Art Worker of Russia, laureate of the Golden Mask Prize Boris Nodelman.

The maestro did an excellent job with an unusual task for a musician. It was not only his voice that helped him to convey the intonation nuances of the text, but also professional gestures. The famous “dictator” also received a sweet set as a gift from the Biological company.

“We were very pleased to support the All-Russian action“ Total Dictation ”, – said Dmitry Galaganov, director of the company“ Biological ”,“ not only because we stand for the purity of any checks and tests, but also because we consider the native language the greatest value of humanity. Bees also have their own communication system, which helps them to work well and harmoniously. But language and literature make a person – a person, develop his imaginative thinking, form the centuries-old field of culture”.